Manny makes a date with a woman from his online book club.


Gloria (was preparing) lunch when Manny (walked) into the kitchen. Gloria (noticed) that Manny (had put on) aftershave. He (was waiting) for his date to arrive. He (had met) her in an online book club.

The doorbell (rang) and Manny (went) to the door. When he (opened) the door, he (was) surprised to see that his date (was) much older than he (expected/had expected) .

When Whitney (realized) that Manny (was) only 11 years old, she (strated crying) . She (explained) that Manny (had seemed) very mature during their conversations online.

Manny (apologized) to Whitney for the mistake. He (asked) her if she (would consider) meeting him agian in 10 years if they were both still single.

Gloria: Manny, are you wearing aftershave?

Manny: Yes, for my date. This will be the first time she will ever smell me.


Manny: Her name is Whitney. I met her in an online book club. We both like vampire fiction and the romance of eternal life.


Gloria: I think it's adorable that Manny has a date. He even picked out the lunch menu: grilled-cheese sandwich and tomato soup. Tomato soup because, you know, the tomato soup is like the blood. And the vampires like to eat the blood. And then he wants me to take them out for ice cream, well, because Manny likes ice cream.


Manny: Oh, that must be her. If this goes well, you don't need to stick around.


Whitney: This is so humiliating. I am sorry.

Whitney: He just seemed so mature online. How could I be so stupid?

Mannt: You're not stupid. "Stupid" is not following your heart and taking a chance on love.

Whitney: I mean what kind of 11-year-old talks like that?

Manny: Here. Use my handkerchief.

Gloria: You see what I mean?

Whitney: I'll just be alone for the rest of my life. And that's okay.

Gloria: No, don't say that. In my country, there's a saying that means "Love is just around the corner."

Gloria: I come from a neighborhood with a lot of prostitutes.

Whitney: Maybe for you. I mean, men must throw themselves at you every day.

Gloria: They'll do the same for you if you just…

Whitney: Just what? Put out?

Gloria: No. Just like, the lipstick, the hair, push-up bra. You know.

Whitney: What does it matter? I'm never going to be as pretty as you.

Gloria: Ay, believe me, this takes a lot of work. You just need to find your inner beauty.

Manny: It's hiding beneath a mask of insecurity.

Whitney: Okay, he's starting to freak me out.

Gloria: We're here. This is Whitney. We're giving her a makeover.

Whitney: Hi. You have such a nice family and a really beautiful house.

Jay: Thanks. You two know each other how?

Manny: I'm sorry this didn't turn out like you wanted.

Whitney: That's okay. It probably didn't turn out how you wanted it either.

Manny: I'll tell you what. If neither of us is with anybody in 10 years, how about you and me give it a shot?

Whitney: What do you think?

Gloria: Look at you!

Gloria: You're going to be fighting men off with a stick.

Whitney: I don't know about that.

Cameron: Hi. Sorry for the pop over, but I just wanted to bring you these to thank you for babysitting Lily again last night.

Gloria: Oh! Gracias. You didn't need to do that. You know I love Lily. Come in. Say hello.

Gloria: Cameron, this is my new friend, Whitney. Whitney, this is Cameron.

Cameron: Hello. It's nice to meet you. That is a spectacular dress.

Gloria: What about her hair?

Cameron: Oh, my gosh. It's like Barbra Streisand in The Way We Were. One of my favorites.

Cameron: Okay, who is reading The Forevers?

Cameron: I am so obsessed with this whole vampire thing right now.

Whitney: I just met the sweetest guy named Cameron. I think he might be the one. 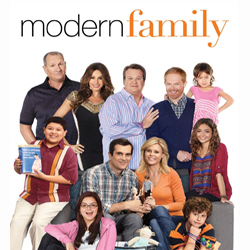